When interest rates are low (as they are right now), one of the most common conversations we find ourselves having is whether ‘now’ is a good time to fix home loan interest rates.

As with all questions around finances, the answer should always take into account the nuances of your individual goals, needs and situation. But in more general terms, there are better times to fix home loan interest rates than others.

Understanding when that time is first relies on understanding how the cash rate works in Australia.

What is the cash rate and how does it work?

In simplest terms, the cash rate is the interest rate target determined by the Reserve Bank of Australia (RBA) at which they lend funds in the overnight money market to banks.

The banks then use these funds, in combination with deposits from their customers, to fund lending for a variety of purposes. Those purposes include, but are not limited to:

What interest rate do banks charge to people who borrow money from them? Well, they add a margin to the cash rate (the cash rate being their own cost of borrowing), and that total amount is what the consumer pays.

So if the cash rate is 0.5%, the banks might charge a margin of 2.5% to mortgage holders resulting in a total borrowing interest rate of 3%.

Banks tend to move their interest rates up and down with the cash rate when the RBA announces a change.

How often does the RBA announce changes to the cash rate?

The RBA meets on the first Tuesday of every month. While the RBA has the ability to change the cash rate every month, they only do so after reviewing the economic outlook and determining whether they need to intervene (by changing the cash rate) to help achieve the mandate they have set for themselves.

What is the RBA’s mandate?

As set out in the Reserve Bank Act 1959, the RBA sets interest rates to achieve the following objectives:

The RBA also has a long-term inflation target of 2-3% p.a. which was introduced in the early 1990’s. (What’s inflation? Click here.)

Let’s quickly explore these terms in more detail as they are relevant to the question of ‘Should I fix my home loan interest rate or not?’.

When the RBA decreases the cash rate, their ideal outcome is that this flows through to borrowers and depositors, resulting in those people having more money to spend. Common mechanisms at work here include:

So you can see how decreasing interest rates has an expansionary effect on the economy:

This results in more economic activity which leads to economic growth, inflation and higher levels of employment.

The flipside of the above is when the RBA would like to reduce economic activity. That’s when they implement contractionary monetary policy by increasing the cash rate. Let’s look at how this affects the groups mentioned above:

As you can see, increasing interest rates has a contractionary effect on the economy:

In March 2020, the RBA reduced rates to an all-time low of 0.25%. They reduced this further in November 2020 to 0.10%. Since then, the RBA has kept rates on hold, and this continues to provide an expansionary effect on the economy.

Now that we understand the cash rate in Australia and how that affects the lending rates offered to consumers by banks, the next thing to address is why someone might choose a fixed home loan rate over a variable home loan rate.

A good way to illustrate this is to show how choosing one over the other in the past led to certain outcomes for borrowers.

This meant someone with a home loan of $500,000 in June 2008 would be paying principal and interest repayments of: And the picture was very different:

At those rates, the same people with home loans of $500,000 would be paying principal and interest repayments of:

The person on the variable rate found themselves with $873.36 more money to spend each month than they did in June 2008. And were $568.27 better off every month than the fixed-rate borrower still ‘stuck’ on the same rate they were in June 2008. 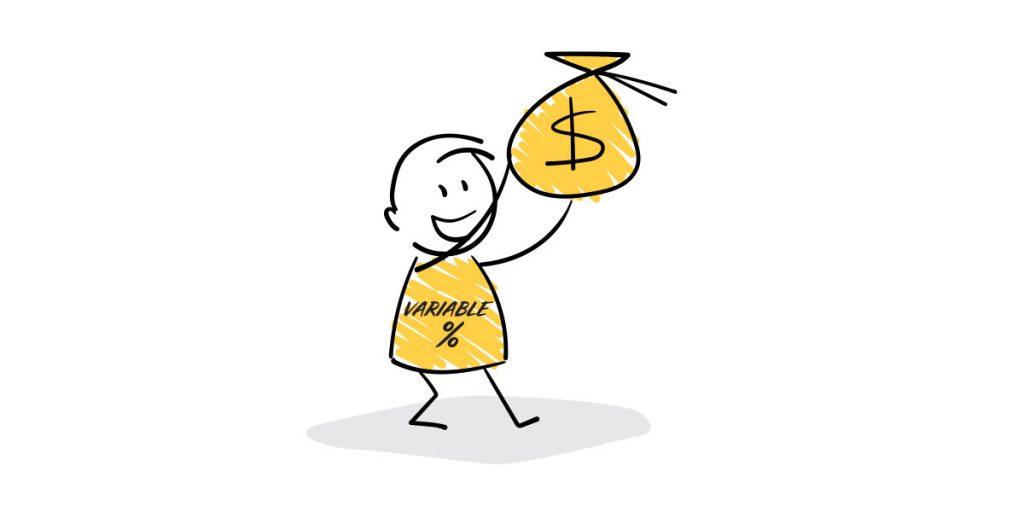 Things in September 2021 are very different to the above.

These figures are very important when it comes to answering the question this whole article has been penned to answer.

Should you fix your home loan interest rate?

As with all financial decisions, the answer to this comes down to risk versus reward.

As noted above, the difference between fixed and variable home loan lending rates is currently only 0.5%. And the capacity for that variable rate to drop lower than 2.5% is almost zero. Thus the reward of staying on a variable rate compared to the current fixed rate is small.

With regard to risk, when it comes to home loans, the biggest risk you face is not being able to afford the interest repayments.

With the RBA explicitly stating they have no appetite for taking the cash rate into negative territory like some countries have, there is only one way interest rates can go from here – up.

Now, the chances of them going up in the immediate future seem slim as the RBA stated just this month:

The Board is committed to maintaining highly supportive monetary conditions to achieve a return to full employment in Australia and inflation consistent with the target. It will not increase the cash rate until actual inflation is sustainably within the 2 to 3 per cent target range. The central scenario for the economy is that this condition will not be met before 2024. Meeting this condition will require the labour market to be tight enough to generate wages growth that is materially higher than it is currently.

BUT – the truth is the RBA can only make projections and statements like the above based on the information they have at the time. No one really knows what the next few months and years hold.

With these points in mind, it’s important to consider your own circumstances before making a decision.

If you do have a financial advisor, we of course recommend you take the opportunity to discuss decisions like this with them.