It’s a widely known fact that small business owners are notoriously bad at paying themselves super. Mostly because:

While there are certainly situations and seasons where paying super can be a low priority for small business owners, it’s almost always a good idea to give it close consideration. Here are five reasons why.

2. You might get a bigger than usual tax deduction

There are two main types of super contributions:

Super is an excellent vehicle within which to tax-effectively obtain and hold personal insurance cover.

As a starting point, life insurance is particularly suitable to be held inside your super. It pays a lump sum to your family if you pass away or become terminally ill.

TPD insurance also often has a place to be held inside super, (though there are some restrictions to be aware of here). TPD insurance pays a lump sum amount if you become totally and permanently disabled.

The other insurance cover that may be held inside super, with some conditions, is income protection insurance, sometimes referred to as salary continuance cover, which can pay up to 75% of your pre-tax income for a set time period if you’re unable to work.

The Australian Government has a super co-contribution initiative that aims to help boost the retirement savings of low and middle-income earners.

If you have a yearly income of less than $56,112 (before tax), and you meet the eligibility criteria, the Government will match 50 cents for every $1 that you add to your super from your after-tax income up to $500 a year. This might not seem like a large amount but over 15-20 years can have a significant impact on your super balance.

Furthermore, you are entitled to a tax offset of up to $540 if you make a contribution of $3,000 for your spouse if they aren’t working or their assessable income is less than $40,000. Read here for the other eligibility criteria.

5. It’s an invisible but effective way to leverage the power of compound interest

It’s when interest is calculated on both the initial principal amount AND the accumulated interest on money borrowed or invested.

Why should you care about compound interest?

Because those who are able to apply it to invested funds over an extended period of time reap considerable rewards. (So much so, Albert Einstein was said to have called compound interest the Eighth Wonder of the World.)

Here’s an example of how it works.

If you take that same $500/month, however, and put it in an investment where you receive a 5% return compounding annually, you’ll end up with $288,056 after 25 years. Almost double what you started with, and a much better return than the ‘squirrelling it away in a shoebox’ method! What does this have to do with you, the small business owner, and super?

Well, by contributing regularly to super, you are also leveraging the power of compound interest.

And the best thing is, even a small contribution every week can yield big returns over time.

Here’s what an initial super balance of $1,000 plus a weekly contribution of $20 (after tax) per week can look like over time (assuming 5% return compounding annually). 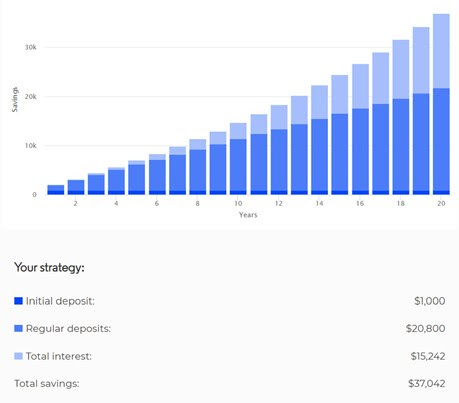 The other best thing about super is that it’s an investment that you can’t touch. Since you can’t access it until retirement, you won’t ever find yourself in a position where you’re tempted to plunder it to prop up your business.

Most powerfully, however, making super contributions also ensures that even if things don’t work out for your business, you still have something to show for all the hard work you put in.

This information is of a general nature only and has not taken into account your particular circumstances.  Before making any decision to act, you should consider whether the strategies are suitable for your personal situation and needs.